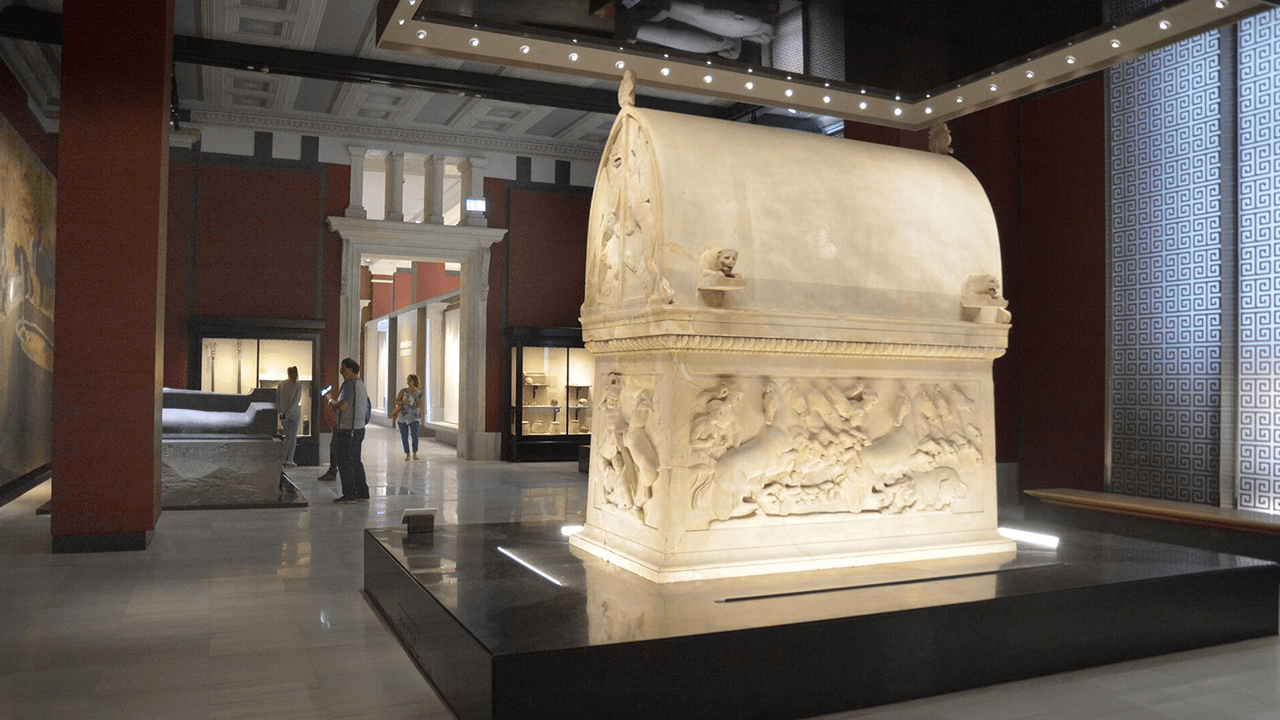 It was the first museum in Turkey and remains as the most important. It is named in plural because it includes three different museums: the Archaeological Museum, the Ancient Near East and Ceramics and Jewelry one.

The Museum, founded in 1891 by artist and archaeologist Osman Handi, is located on the slope between a courtyard of Topkapi Palace and Gülhane Park in Sultanahmet area, the tourist area of Istanbul. During the visit to the Museum you can enjoy the beautiful and exquisite garden and get access to the three different buildings.

On the ground floor of the Archaeological Museum sculptures of Antiquity, from the Archean to the Roman era are exhibited, with artifacts internationally known like the famous Alexander Sarcophagus, among others. On the upper floor there is the State section, Islamic and non-Islamic coins Cabinets and a Library. We can also see permanent exhibitions such as cultures around Istanbul, the “Museum of children”, “Istanbul through the ages”, “Anatolia and Troy through time” and “Cultures around Anatolia” with important findings from excavations throughout Turkey and other countries such as Cyprus, Syria and Palestine.

The Museum of Ancient Near East collection consists of artifacts from pre-Greek Anatolia, Mesopotamia, pre-Islamic Egypt and the Arabian Peninsula. Most of these artifacts were found in archaeological excavations from the late nineteenth century and the First World War. This museum has sections of pre-Islamic Arabic Art, articles by country and cuneiform documents, arranged by the regions and the historical order. In addition to unique and famous objects like the Akkadian king Naram-Suen’s Stele, the Treaty of Kardesh or the Ishtar Gate, the building houses the Compressed File, which contains 75 000 cuneiform documents.

More than 2000 objects make up the collection of the Museum of Ceramics and Jewellery, belonging to the Seljuk and Ottoman periods, between the eleventh and twentieth centuries. The museum is covered in tiles from these own collections, so the building itself is one of the main attractions.

For lovers of archeology and antiquities this museum is a gem. Its rich collection of sarcophagi and other priceless objects is very interesting. It’s worth to appreciate carefully the sarcophagus of Alexander and Meleager.

A negative observation that could be made is the true abandonment of some rooms.

Between Topkapi Palace and Gülhane Park.

Hot to get there?