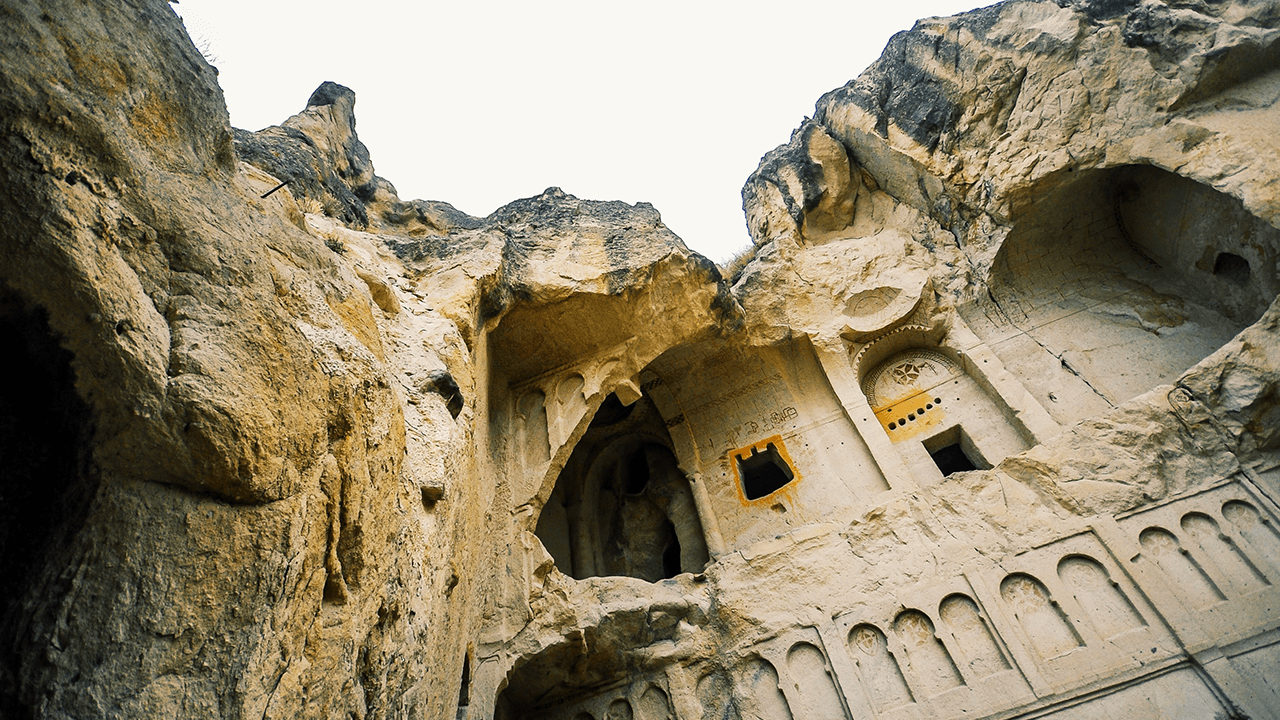 It is believed that there are underground cities in Cappadocia since the Hittite period. So far only 36 have been discovered, but experts say that still there must be many underground cities entombed in the region. The widest and expanded is Kaymakli, while the deepest is Derinkuyu. 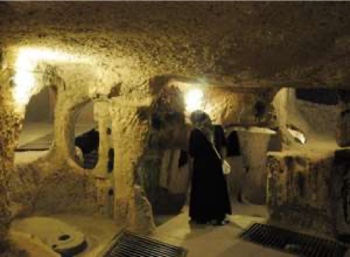 It was built into the hill of the Kaymakli Citadel and opened to the public in 1964. The people of Kaymakli have built their houses around nearly one hundred tunnels of the underground city, still used as warehouses, stores and stables.

Although the underground city consists of eight floors underground, only 4 of them are open to the public, in which the space is distributed around the vents.

The first floor was occupied by the barn. The shift to the left of the blocks contains a millstone door and leads to the church. To the right are different excavated rooms for seating areas.

The church on the second floor has a single nave and two apses, with an altar in front and two sided rest platforms.

The most important areas of this underground city are located on the third floor. Besides numerous storage, warehouses and kitchens, the block of andesite with relief textures is very interesting, as it is proved that it was used as a copper pot, with 57 holes on its surface. It is believed that copper was brought from a quarry between Aksaray and Nevsehir, as it has been found in various parts of this region.

The fourth floor was reserved for a large number of warehouses of pottery, so it is believed that the city had a stable economy. In this floor you would also appreciate the vent, a vertical shaft that extends through all floors and whose depth is estimated at 80 meters. According to archaeologists, Kaymakli could have housed a lot of people. 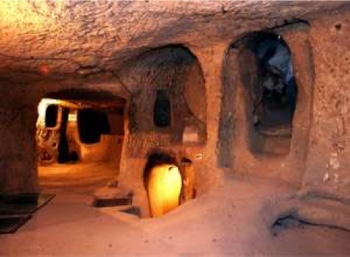 It is located under the town of the same name, 40 kilometers from Goreme (30 minute drive). It has about 600 exterior doors, hidden in the courtyards of the houses in the area.

The underground city is about 85 meters deep and contains the common rooms of this kind of buildings in the region: barns, warehouses, stores, canteens, churches, etc. As a special feature, in its second floor in a large room with a barrel vault, there is a missionary school, with dining and study rooms.

From the third and fourth floors the descent is through vertical stairs that lead to a cross planed church on the lowest floor. The vent, about 55 meters, was also employed as a well. Derinkuyu contains at least 15,000 ventilation ducts that provide fresh air to the deepest parts.

This underground city was opened in 1965 and until now less than its half is open to the public. In general, these underground cities were built for temporary stays, with the aim to protect themselves from enemy attacks and adverse weather. For its complex urban organization is believed that the construction and improvement of the city remained in progress for long. 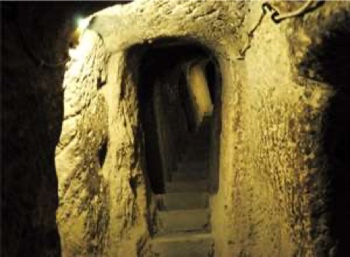 Located 14 kilometers northeast of Avanos, this underground city was built on the northern slope of Mount Idis, with numerous layers composed of volcanic granite. Its wide passages are expanded along a large area and connected by tunnels.

Unlike Kaymakli and Derinkuyu, Ozkonak has a system of communication between the various levels, through narrow holes, which allow ventilation of these spaces if the city was locked from the inside for protection.

Ozkonak was discovered in 1972 by the local muezzin and farmer Latif Acar, trying to locate where the water went when he watered the crops. After finding an underground room, the first excavations revealed an entire city designed to house an incredible number of people. They found a total of ten levels, although only four are available to the public.

Unlike other underground cities in the region, in addition to doors there were holes above the tunnels used for pouring hot oil against the enemy. Like Kaymakli and Derinkuyu, Ozkonak has a ventilation system, a water well, wineries and movable stone doors.