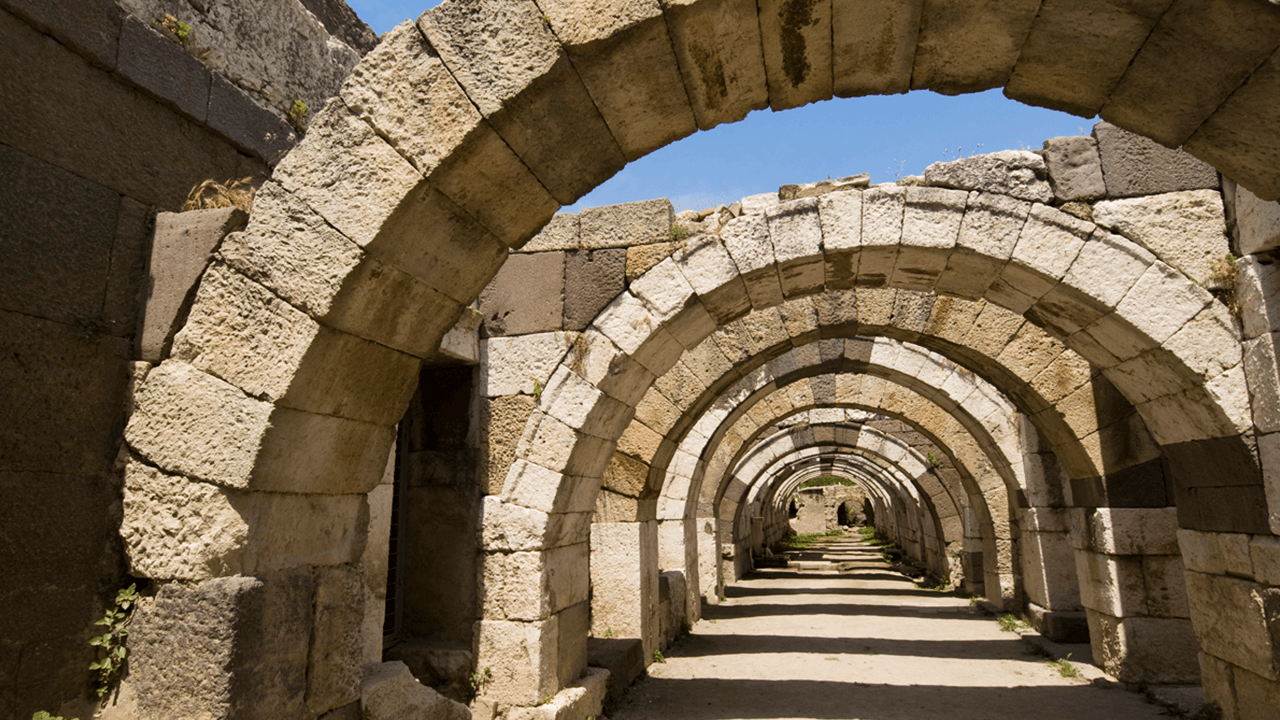 The origin of its name comes from a mythological passage, when the wife of the king of Cyprus said that his daughter Smyrna was more beautiful than Aphrodite herself. As a punishment to her possible rival, Aphrodite made the girl to fall in love with her own father and a night that he lay drunk the girl got into his bed. The next morning, when the King awoke and saw her daughter at his side, airy grabbed her and expelled her from the palace. Then he followed her to the fields and tried to take her life with his own sword. But according to legend, when he was going to kill her, Aphrodite turned the girl into a myrtle tree, that the king divided into two halves, from one of which Adonis would be born.

The city of Izmir is one of the oldest settlements of the Mediterranean watershed. Excavations of the last decade indicate two prehistoric levels, pointing to Neolithic and Chalcolithic settlements. From about the third millennium B.C. settlement is presumed to be in Bayraklık, where the ancient Smyrna was founded. By 1500 B.C., the region came under the influence of the Hittite Empire in Central Anatolia. By then, on a war with Troy, it already promised to be one of the most advanced cultures in the region, who would become one of the most important cities of the Ionian Federation in the first millennium, alleged birthplace and residence of Homer, the great poet.

Between 600-610 B.C., Smyrna was conquered by the Lydians, until the fourth century B.C., when the Persians took control and built a new city in Kadifekale. By the time of the conquest of Alexander the Great. From the first century B.C. to 1415 A.D., the city was conquered by Byzantines, Seljuks and finally the Ottoman Sultan Mehmet Celebi.

The port of Izmir is the second largest in Turkey, which has given the city a touch of prosperity and modernity. It is lively and cosmopolitan throughout the year, especially during the International Art Festival in June-July and the International Fair in August-September.

There are some museums in Izmir, which may be of your interest. The Archaeological Museum is one of them, located in Konak Square, with statues of Poseidon and Demeter. Next to him is the Ethnographic Museum, which has an extensive collection of folkloric artifacts, Bergama and Gordes carpets, traditional costumes and camel bridles. The Atatürk Museum, located in the street of the same name, features a collection of photographs of Mustafa Kemal Atatürk and his personal belongings. The Museum of Fine Arts is also located in Konak and a permanent exhibition of famous Turkish painters and classic, while the Selcuk Yasar Art Museum in Cumhuriyet Avenue, encompasses a representation of the national art of the twentieth century. Moreover there is also the Natural History Museum and the Botanical Garden of the Aegean University in Bornova.

Temples and ruins can also be appreciated in Izmir, as the one dedicated to Athena in Bayraklık or the reminiscences of Kadifekale Castle, built by Lysimachus in the reign of Alexander the Great. From the same period comes the Agora of Namazgah Square, although its ruins remind us of Marcus Aurelius, who rebuilt it after an earthquake in the year 178 A.D. From the Roman engineering persist the Sirinyer and Yesildere aqueducts. They can also be seen: the Church of St. Polycarp, who represents one of the Seven Churches of Revelation, the Clock Tower (Saat Kulesi) in Konak, the Asansor in Jewish neighborhood, the streets Havra and Dario Moreno, the Monument of Atatürk and Karsikaya and Alsancak areas, abundant of bars, cafes and nightclubs.

Among the mosques that are worth visiting in Izmir are Hisar Mosque, built in the sixteenth century, or those of Salepcioglu, Sadirvan and Kemeraltı, located near the district of the same name, where dried figs, very popular in the region, are very common.

The most popular park in Izmir is the Culture (Kultur Park), home of the International Fair, although there are amusement parks, zoos, restaurants, theaters, libraries and beautiful gardens. In Karsikaya, for example, is Adnan Saygun Park with an amphitheater for concerts and other performances, as well as the Open Air Museum Park, the Park of Human Rights, the Muammer Akso Park and recreational Turgut Ozal, in Bayraklı.

One of the most interesting places to visit is Balcova, where you will find the largest hot springs in Turkey. There are hotels around designed for spas, and they offers mud baths and herbal saunas, paraffin, skin care, massage and supervised exercise with professionals in rheumatism, joint pains and other orthopedic and neurological conditions.

15 kilometer from Karsiyaka you will find Camalti, a protected area for being a bird sanctuary, known as the Paradise of Birds of Izmir, where numerous species abound, such as flamingos and pelicans.

Izmir Province and its capital are very well connected and easily accessible by air, sea, road or rail. Izmir is located 90 miles north of Kusadasi, an important tourist port and cruise route. Buses are available every 30 minutes. You can visit the city on one of our daily private tours.