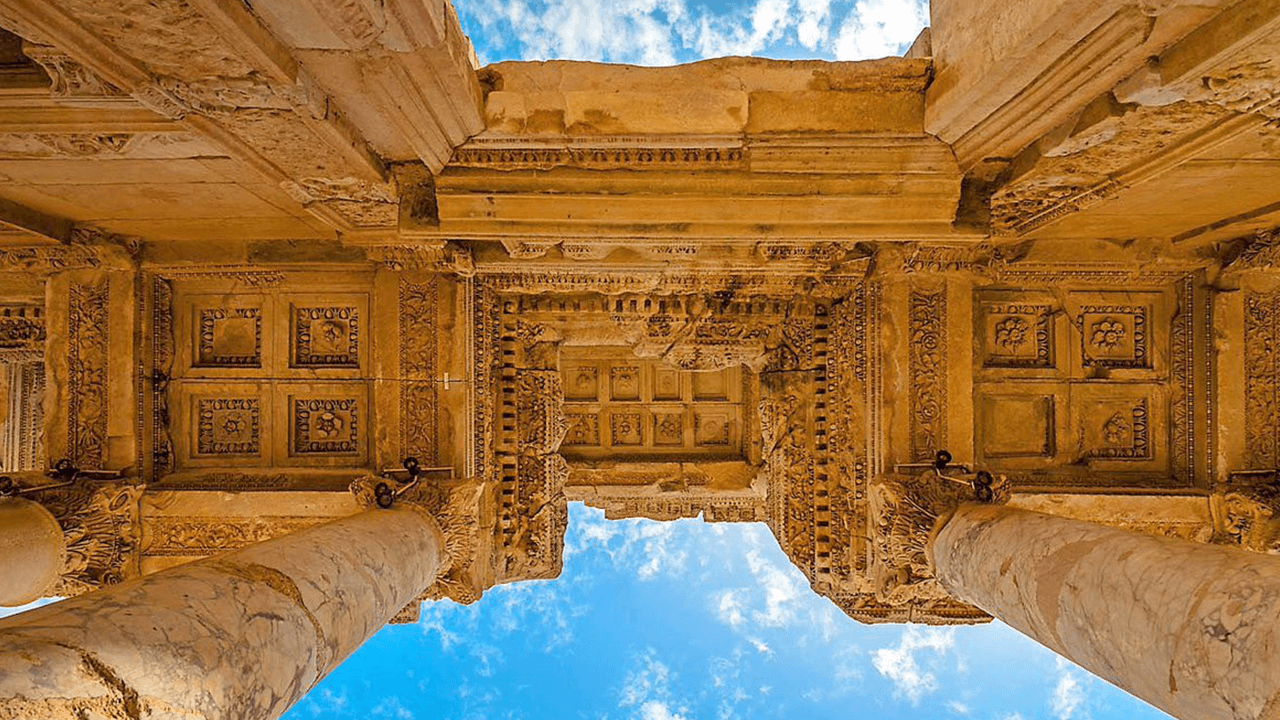 According to ancient historians, the myth of the foundation of Ephesus dates back to the period before the Ionian colonization. They said that before starting to extend their domains and seek a new settlement, Androcles, son of the King of Athens consulted the oracle about his new journey and the oracle replied that it should be “in the place that will be indicated with a fish and a boar “.

On landing in Anatolia, Androcles and his settlers camped in a clearing, in which, according to legend, while roasting a fish, sparks flew from the pan and created a small fire in the bushes, from where jumped out, scared, a boar . Recalling the words of the oracle, the colonists decided that they had found their new settlement.

Other sources point the founding of the city by the Amazons. According to mythological stories, the Amazons were a race of warriors, presumably daughters of Ares, who lived in Anatolia, by the second millennium B.C. It is said that the Amazons took part in the Trojan War supporting Hector, so that Achilles took revenge and killed Penthesilea, their queen, a woman so beautiful that once he saw her well, even dead, Achilles himself fell in love with her. According to legend, the Amazons interacted with men only in two ways: war and procreation, and only admitted female daughters.

Another theory on the foundation of Ephesus suggests that this city was the Apasas of the Hittites, about 1400 B.C. However, the oldest archaeological evidence found is a Mycenaean pottery, in Ayasuluk Tepesi (Ayasuluk Hill), but this does not mean that there was a Mycenaean settlement in the region, since this ceramic was very popular and it has been found in many other places.

Ephesus has been located in different places at different times: Ephesus I was in Ayasuluk Tepesi, inhabited by ancient Anatolians, Carians and Lelegians. At that time there was a worship to the Great Mother Earth (Triple Goddess, Cybele), which acted as a magnet attracting pilgrims and settlers, even before the Ionian migration.

Ephesus II were latched on the northern slope of Panayir Dagi (Mt. Pion) and, like other cities of the Aegean coast of Anatolia, became ruled by Croesus of Lydia and then by the Persians, from 546 B.C. In 334 B.C. it fell to Alexander the Great and later to his  successors: Lysimachus and Seljuk rulers.

In the fourth century B.C., the port began threatening to wallow, so it was necessary to move the town, and created Ephesus III, among Panayir Dagi and Bulbul Dag (Mount Coressus). The remains of the walls of Ephesus III can still be seen on the slopes of Bulbul Dag.

Later the city was taken over by Pergamum and eventually passed into the hands of the Romans (from 133 B.C.). During this period, Ephesus became the capital of the province of Asia Minor and the population reached a quarter of a million people, but among the problems with the port and the repeated Arab raids, the city moved back to the Ayasuluk Hill, forming Ephesus IV, mainly what we visit today.

The Temple of Artemis and Ephesus’s History

Located on the hill is the Temple of Artemis, or Artemision, one of the Seven Wonders of the Ancient World. Dedicated to the worship of Artemis, popular in the region, became a much-visited pilgrimage center, attracting at the same time a lot of people to the city itself. Every year, they took a whole month holiday reserved for religious rituals and contemplation.

The first temple was built in the sixth century B.C., with an Ionian Diptera structure, two rows of columns on both sides and three rows in the front and rear. He had a total of 127 Ionic columns, with a height of 19 meters each, of which 36 had relief sculptures.

In 356 B.C., a disturbed character named Herostratus burned the temple in order to make his name immortal. That same night in Macedonia, Alexander the Great was borning, who later, upon his arrival in Anatolia, offered to make a donation to save the temple, with the condition of attached his name to it. However, his offer was rejected with a polite and very successful response, “it would be improper for a god to build a temple for another god.”

It was not until so long after that the second temple was built in the same tier but with a base of 13 steps. A proof of its Anatolian origins is the fact that the temple faced the west, while Greek temples are, as a rule, facing the east. The same issue happened in the temples of Sardis and Magnesia, on Meander. The columns were shorter and thinner and reliefs were created by the famous sculptor Scopas, while the altar were made by Praxiteles.

But in the year 262, the Goths invaded the area and razed the temple. Gradually, the Ephesians were converted to Christianity and so the temple ceased to have the same old religious significance, so that many Christians, even used his remains and ruins for other constructive functions, as it symbolized the final victory of Christianity over paganism.

There are clear Biblical passages that alluded to Ephesus, as in Acts 19-20, in relation to the ministry of the Apostle Paul in that city. It is believed that Paul spent two years in Ephesus during his third missionary journey, until a revolt forced him to leave the city. Some sources claim that the apostle was imprisoned in what is known as “Prison of St. Paul in Ephesus”, a small tower in the Hellenistic city walls. Thus, finally, faith in Christ and the veneration of the Blessed Virgin replaced the cult of Artemis and other pagan deities.

In the year 431, took place in Ephesus the third ecumenical council, which discussed the issue of the Virgin Mary as the Mother of God. It was also decided that Christ had a dual nature as man and God and the Virgin Mary was the mother, the bearer of God.

Ephesus, one of the seven churches of Revelation

These churches are associated with St. Paul and also with the Revelation, letters written by John to the seven churches. For some people, John was a visionary who lived on the island of Patmos, while for others it is the apostle John. In those times there must have been more than seven cities with large Christian congregations in Anatolia, so it is ignored why John selected especially these seven. It is speculated that they were the most important or simply that the letters to other churches are lost.

When we talk about churches we are not referring to the buildings but to Christian congregations, who had their meetings in private homes, as church buildings are not known until the third century. Some of these seven churches-congregations may have been founded by St. Paul himself, in his missionary journeys, as it is known that he visited the seven respective cities (Revelation 2:1-7).

The last days of splendorous Ephesus, from the change of powers to the decline

During the period of Emperor Constantine he rebuilt some sites and order to build new Baths. Ephesus remained as the most important city of the Byzantine Empire after Constantinople for the V and VI centuries, until an earthquake partially destroyed it in the year 614.

The importance of the city as a commercial center was declining as the port began to bog by the river, despite the repeated dredges the Ephesians made throughout its history. The loss of that port impeded Ephesus to access the Aegean, the key to trade. Since then, the Ephesians began to leave the low city to the surrounding small hills. The ruins of some temples were used to build new houses and marble sculptures were reduced to powder to make plaster. Additionally, Arab looting helped accelerating the decline.

When the Seljuk Turks conquered Ephesus in 1090, the big city was reduced to a village, and so it stayed, even when the Byzantines retook power between 1097 and 1308.

Later, Ephesus was taken by Sasa Bey, a commander of the army of a Seljuk principality and assigned in turn to another principality. The new regents create a new harbor in Ayasuluk (current Selçuk), which once again provided a brief flowering period during the fourteenth century, in which new elements and buildings were inserted, like the Isa Bey Mosque, the caravanserais and the Turkish baths (hamams).

Thus, from 1390, for the first time, Ephesus was incorporated as a vassal state to the Ottoman Empire and returned to be, after a period of recovery of the region by the Turkmen Bey from Anatolia in 1425. Gradually, the town was completely abandoned in the fifteenth century and lost forever its former glory. In 1914, the port and the city of Ayasuluk were renamed as Selçuk.