The Open Air Museum Goreme is composed of natural cliffs that house churches and monasteries hidden in the rock, excavated from the second half of the ninth century. Currently two of its beautiful churches are closed to visitors due to its deteriorated condition. The Kizlar convent, located to the left of the entrance is also in ruins. It is hard to imagine that it was a huge five-story complex, with a dining hall, kitchen, stores and a nun’s hall in their lower floors, a chapel in the third and the upper two with two large round stones that were used to block access to the complex in dangerous situations.

Located in the heart of Cappadocia, the Open Air Museum Goreme is usually one of the first places visited by tourists, as it is very accessible from anywhere in the region and only 1.5 kilometers (1 mile), a 15 minutes walk from the village of Goreme, one of the main destinations for accommodation and attractions in Cappadocia. Admission to the museum costs 15 TL. According to legend, Santa Barbara, after converting to Christianity, was imprisoned and murdered by her own father, who was punished to death later with a lightning. Since then it is known as the owner of Lightnings, patron of architects, stonemasons and artillery men and their most common attribute is a tower and three windows representing the Holy Trinity. With the same name, there is a Saint Barbara Church in the Open Air Museum Goreme, in honor to this saint, which appears also displayed in one of its walls. In this church of the eleventh century, with two columns, three apses and a side entrance, there are beautiful frescoes whit a predominant red ocher color, representing also the Christ Pantocrator and Saint George and Saint Theodore fighting a dragon as an evil force.

Moreover, the Yilanli Kilise or Church of the Serpent, is named after one of its frescoes which depicts a snake, as a symbol of the demonic, fought by these two saints and at Saint Onesimus. An interesting feature of this church is that the frescoes are framed as icons. Here is also shown Constantine the Great and his mother, Helena, carrying the cross. A transcendental figure for Christianity, Emperor Constantine declared it as official religion in 330, and his mother was a great practitioner of this faith, who is said used the influence of his son to promote it.

A striking feature is the fact that the names of the churches in the Open Air Museum Goreme, and in general in all Cappadocia, arise from the figures and scenes of their frescoes. Another example is the Church Carikli Kilise or Church of the Sandal, from the thirteenth century, named after a mysterious footprint stamped below the fresco of the Ascension. This is a church with a cruciform nave, two columns, three apses and four domes. In its frescoes are three men who were donors for the construction of the church. Judging their appearances we can estimate they were wealthy farmers from the region.

Another excellent example of the particular names of the churches is found in the Tokali Kilise or Buckle Church, that some also call the “new church”. This is one, if not the most, spectacular of all hewn churches of Cappadocia. Is dated from the tenth century and its planning is quite special, with a Mesopotamian style transept, three apses, a carved portico, a chapel and a buried crypt. Its frescoes are distinguished by a bright blue pigment that was not abundant in the area, so it is estimated that substantial capital was invested for the construction of this church, importing the pigment from other regions. 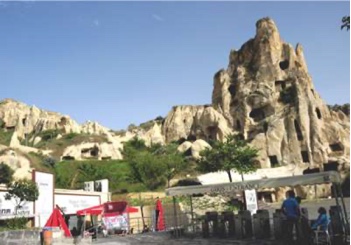